I'm Lost With You

1. There is no way you could have had a day as good as I've just had. Okay, maybe you could have, but there is no hope for anybody else!
Second. This post suddenly seems so inadequate (compared to the events of the day)... makes me look forward to writing tomorrow's post... 🙂 On we go anyway!

Tonight is Lost night.  But you knew that .  And since I have no reception (I mean dish, cable, etc,  don't get cute) I get to hulu Lost tomorrow (so don't tell me what happens!)

I have had a couple of thoughts rolling around in my head in regards to the last episode and something that I think I posted quite a while ago (may not even be up anymore, but you might remember it).  And it ties in so nicely with Lost and the 'did you feel it' moments from last week.  By the way, I think this was one of the best episodes they have done and it gives me hope for the rest of the series... not so much hope that I think they will answer any questions, however.  I've had the chance to watch the show several times with different people - I feel it every time, but nobody else does.   You felt it; have you noticed that anyone else did?  (I know, you're so on the ball you felt it twice!) 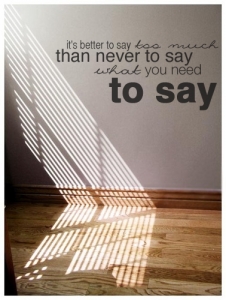 why i talk too much

First, let me tell you a little about a theory/philosophy/craziness that I have.  As standard disclaimer protocol dictates (what?), this is probably not my original thought and may resemble other people's crazy thoughts etc, etc.  But let me get serious for just a minute.... (yah, can't do it)

When I was but a wee lad (back in me Irish home),  just getting started in one of the hathaway rock bands, I wrote a song called Parallel Lives (no you can't hear it) which is along the same lines; so I know I've had this belief(?) for a long time.  You ready? Cuz I need you to be ready...  🙂

So... what if every possible outcome actually happens.  So that means that everything that could have happened, has happened.  Think about it for a minute...  I know that it means infinite possibilities and infinite outcomes, (and I can't begin to think about the math involved there... band, remember?) but in a never ending universe, it's not really that far of a stretch.  Maybe on a different line you and I meet each other 30 years ago... or not until 5 years from now... or not at all... What difference would that have made? "what if this, all this, what if this wasn't supposed to be our life. What if we had some other life and for some reason, we changed things."

I am pretty sure that I am on the best line out of all the possibilities, because my life pretty much rocks. But there have been times when just the thought of a line somewhere with no regrets and better choices made me feel better; that somewhere at that time when I was miserable was a Dee who was very happy. Someday I'll get more into what all that means to me personally, but the daylight is going fast and I've got songs to post and surprises to prepare. And I know that's enough about that from me for now, so let me tie this in with you and me and lost.

Lost added a new twist to my little thought (one that I suspect was there all along, but my 'change' in thinking lately has enabled it to rise) - what if those 'lines' of reality got crossed? What if you became aware of a different path? I like to think that Lost had it right. And I'll take that craziness one step more... I don't think the lines have to cross to catch the glimpse of other possibilities... Ever have deja vu? Ever have deja vu? (haha!) Ever just meet someone and feel like you've known them forever? How about pour your heart out to someone and not really know why? I think it's that connection... the familiarity of something that happened so close to you that it might have actually been you.

And didn't you feel that way just for a little while during the last episode? I felt it.
🙂

"You felt it didn't you... This doesn’t matter, none of this matters, all that matters is that we felt it."